As a specialist palliative care hospice, we provide multidisciplinary support for patients, families and carers in the following areas:

We are a registered charity providing care and treatment for those living with life-limiting illnesses. Whilst we receive funding from NHS Lanarkshire, this only partially covers our running costs.

Continued provision of these services is only made possible by the generosity and assistance of the people of Lanarkshire.

St Andrew’s Hospice became a limited registered charity (OSCR) (Charity No: SC010159) in April 2006, having previously been an unincorporated association, operating under the care of the Religious Sisters of Charity.

Who we look after

We offer care and support to patients and their families tailored to meet their individual needs. Our goal is to provide physical, psychological, social and spiritual care for our patients in a calm, peaceful and welcoming environment. We aim to ensure our patients live as actively as they can, for as long as they can and ensure they have the best quality of life possible. We care for patients with a range of needs including symptom management, rehabilitation as well as end of life care.

The Religious Sisters of Charity came to Lanarkshire in February 1957, at the request of Bishop Scanlon of Motherwell. Four of the Sisters established a Nursing Home for the frail elderly and terminally ill at Assumption House in Airdrie. Their Mission was to provide much needed care for those of any faith and those of no faith at all. Those Sisters brought with them the founding traditions of the pioneering Religious Sisters of Charity, who had already established Hospices in Harold’s Cross Dublin, which was founded in 1879, St Joseph’s Hospice London which was founded in 1905 and St Margaret of Scotland Hospice Clydebank , which was founded in 1950.

Those hospices form an integral part of the International Healthcare Facilities of the Religious Sisters of Charity and St Andrew’s Hospice sits proudly alongside.

By June of 1957 the Nursing Home at Assumption House was ready to admit its first patients. The Sisters initially depended on the Congregation for their funding and they worked tirelessly with the local community and the St Vincent de Paul Society to secure their finances while funding negotiations commenced with the Western Regional Health Board.

During 1958 the Western Regional Health Board had agreed to finance 13 beds, and by 1965 an extension had been built which created space for a further 10 beds.  Lanarkshire Health Board undertook the partial funding of 8 of these beds, creating a total of 21 beds.

Towards the end of the 1970’s, the Sisters recognised their beds were occupied by long-term elderly patients, to almost the complete exclusion of terminally ill patients. The Sisters became increasingly concerned that their care activities were becoming remote from their founding Mission to care for the sick-poor and dying.

The universal experience of the Sisters had recognised years before, that provision of high quality end of life care requires enhanced staffing ratios and the provision of the highest quality services and facilities.  So, in late 1979 a meeting was held between members of the Lanarkshire Health Board and the Sisters of Charity to discuss the improvement of existing facilities at the Nursing Home and to add an extension for the terminally ill. However, Assumption House was subsiding, the roof needed constant repair, and it was suggested a more up to date building was required on an alternative site.  After consultation with the planning department, the former St. Margaret’s School site in Airdrie appeared to be suitable for development. A further meeting between the Lanarkshire Health Board and the Sisters of Charity was held at Assumption House on 31 August 1982. At this meeting it was stated that no assistance could be given with the capital costs of a new building, but the recurring funding of 21 geriatric beds would continue, providing that costs were fixed.

A detailed costing for 10 end of life care beds was submitted to the Lanarkshire Health Board and while the Health Board saw the need for the provision of a terminally ill care unit in the area, no financial commitment was made. The Sisters of Charity were faced with the ultimate dilemma which, simply put, was the risk of going ahead without any funding being available or not going ahead at all. The Sisters in Dublin made another significant contribution and in partnership with the local community, businesses and volunteers, a leap of faith was taken to build a new Hospice.  The Henderson Street site was secured. The Council saw the project as a very necessary service to the local community and surrounding areas and immediately accepted the plans submitted for the building of the Hospice.

The vision of the Sisters for St Andrew’s was that it should be a centre of nursing excellence, providing inpatient and outpatient care within the community, as well as education to enable the development of end of life care in its wider sense. Their vision was uncompromising and completely determined.

By June 1983 an Appeals Committee had been formed to raise funds for the capital cost of the new building, estimated at £1.2 million. The committee members were drawn from a range of backgrounds. They were of differing religions, class, age and profession. All came forward and worked with great dedication and commitment to raise this sum.

The whole community embraced the cause of St. Andrew’s, both locally and throughout Lanarkshire. The new building was finally occupied on 26 April 1986 and the name and address changed to St Andrew’s Hospice.

Over the next 20 years St Andrew’s Hospice continued to flourish and by the turn of the millennium, it had begun to outgrow its original accommodation. Therefore in 2006 a 3 floor extension was built adjacent to the original building, housing education, fundraising, finance, I.T. etc. In addition, 6 family rooms were constructed on the perimeter of the inpatient unit to provide accommodation for relatives to stay overnight.

Now in 2016, St Andrew’s Hospice once again requires to update and improve its facilities to accommodate the increasing requirements and expectations of the people of Lanarkshire. As has been the case since the hospice was first opened 30 years ago, the staff and Trustees have placed their faith in the generosity of the people of Lanarkshire to support an ambitious £9m project to completely transform the patient accommodation in the hospice and make it fit to serve those who need it and their families for the next 30 years.

St Andrew’s Hospice is governed by a Board of Trustees, membership of which is drawn from the Lanarkshire community. Members of the Board are elected, non-executive Directors and Trustees of the hospice and have equal responsibility in law for the actions and decisions of the Board.

Each department within the hospice is managed by a designated manager on a highly devolved basis, with teams being given as much responsibility as is possible within the confines of their training and experience.

St Andrew’s Hospice has an internal framework through which, as a  voluntary sector provider of Hospice and Specialist Palliative Care, we can demonstrate accountability for and ensure continuous improvement in the quality of our services for patients and their families. Our Quality and Governance Framework aims to safeguard high standards of care and creating an environment in which excellence of care will flourish.

At St Andrew’s Hospice, we strive to provide the best possible care for all our patients, their loved ones and carers. This means we’re always looking for ways we can improve any of the services we offer.

If you have any suggestions about how we might improve treatments or if you are not satisfied with any aspect of our service, we would like to hear from you. We see comments and complaints as an opportunity to improve what we do and help us reach the high standards we set ourselves and that our service users expect.

Our Complaints Procedure can be viewed here. 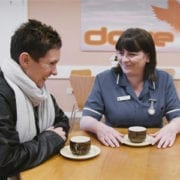 “I always thought a hospice to be a sad lonely place. I couldn’t have been more wrong. The team you have there from housekeeping staff to high management are truly amazing. We always felt welcome there and there was always someone to talk to if we needed them.”