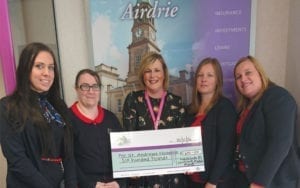 Nationwide’s Community Match Programme is their in-branch, local charity voting scheme. Each quarter, the branches feature three local charities/community organisations from customer nominations. Customers are invited to vote for a winner with a blue token, issued in branch. The nominated charities each receive £100 for being shortlisted to feature in the Community Match voting programme. The charity with the most votes receives an additional £500.

Carol Fleming, Nationwide Branch Manager at Airdrie said: “As a branch, we are extremely happy to support St Andrew’s Hospice as our chosen charity.  Thank you to all customers for helping us to achieve this.”

Lorna McCafferty, Trust Fundraising Officer said: “On behalf of the patients and staff of St Andrew’s Hospice, I would like to thank the customers of Nationwide for voting for us to receive this donation.  We are delighted to have been the winning charity for the West of Scotland and Borders in a selection of local branches.