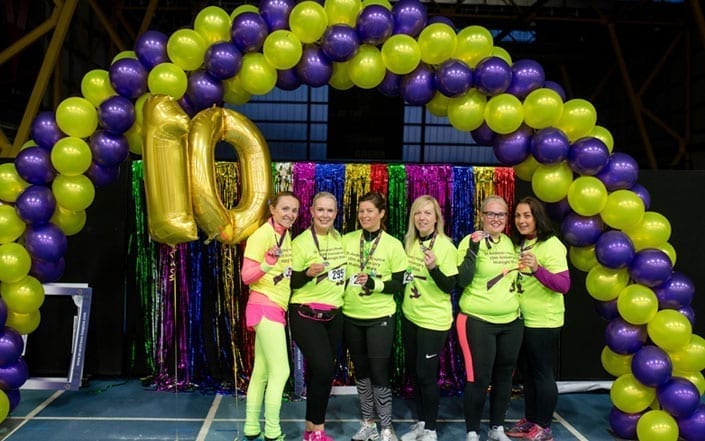 To mark the 10th anniversary of the fundraiser, the walk – which is usually a ladies only event – was open to both men and women.

Participants took part in a Clubbercise warm-up led by Nicola McAleenan from Clubbercise Motherwell, and danced along with Radio Clyde’s Gina McKie before being piped to the starting line by Andrew Park of Airdrie Academy.

Underground Inspection Services, who have sponsored the event since its inception, were on hand to celebrate the anniversary with everyone taking part. Gary & Frances Martin, owners of UIS, said: “We have been delighted and privileged to have sponsored the Midnight Walk for the last 10 years. It’s wonderful to witness our local community coming together and supporting such a much needed cause. The camaraderie among the walkers is quite inspirational.”

John Brady Head of Fundraising said: “We know that many people go the extra mile to raise money for St Andrew’s Hospice – in this case 13 extra miles!

“I want to say a huge thank you to our sponsors Underground Inspection Services and to everyone who took part in the walk to raise much needed income for the Hospice. The funds generated from this event are vital in enabling us to provide a high standard of specialist palliative care to the people of North and South Lanarkshire.”

St Andrew’s Hospice would also like to thank its staff, volunteers, and everyone who helped make the night such a success including; Police Scotland, Blue Knights, Exact, Lanarkshire cycle groups, Mears, A.G Barr,  Tesco, Morrisons and Asda.

Registration for next year’s Midnight Walk is now open. The event will take place on Saturday 15th June 2019. Registration is £10 until the end of July and £20 thereafter. The event is open to both men and women. Click here to sign up!