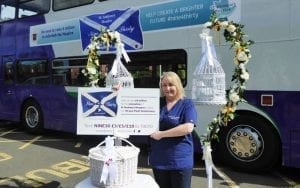 Team Sister, Anne Marie McClung, released white doves, the emblem of the Hospice, as friends, families and supporters gathered to hear details of the ‘Nine4Thirty’ Appeal and the proposed build programme.

As the Hospice marks its thirtieth anniversary, the Appeal is set to transform the existing facilities to be fit for the next thirty years and beyond.  The new designs will retain the existing façade but internally it will be transformed to increase the number of single bedded rooms which will be available alongside multi-occupancy rooms. Some of the rooms will also provide the space for loved ones to stay overnight, experience the comforts of home, and have direct access and views to the much loved gardens.  In addition, a separate patient entrance will be created providing discreet admission to the wards.

Bruce High, Chief Executive said, “Over the past few years there have been significant changes in how hospice care is delivered and also in the expectations our staff, patients and families have of the environment in which patients are cared for.  Patients are also living longer post-diagnosis, and these have all been key factors in our requirement for such a major refurbishment.  Despite some upgrades over the years, our equipment and infrastructure, such as the heating, plumbing and electrical systems are outdated and no longer cost effective or efficient.

“We were very keen to refurbish our existing building rather than build a new one especially as we mark the significant milestone of our thirtieth anniversary.

“Our supporters are vitally important to our work and each year we have to raise £4.6m to fund the services.  It is therefore a massive challenge to raise an additional £9m.  However, over the years the Hospice has touched the lives of many people in Lanarkshire and beyond, and we are hopeful their continued generosity will help achieve our target by 2019 and make the Hospice an even better community amenity”.

There are many ways people can get involved with the ‘Nine4Thirty’ Appeal, with full details available here , and on the Appeal’s Facebook and Twitter pages.  Donations can also be made by sending the text NINE30 /£3/£5/£10 to 70070.  A collection of dove pins are also available to purchase.

Alan Cox, whose wife spent three months in the Hospice added, “The difference between a hospital environment to the Hospice, which exudes warmth, compassion and love is huge.  It’s vitally important to the community.  I’ve worked throughout Lanarkshire and there is no part that doesn’t know about the Hospice.  Everyone has some connection whether distant or close.”

“Refurbishment will bring greater use of space and levels of privacy.   The atmosphere will remain but it’s about moving with the times and accommodating the changing expectations of patients and their families.”

St Andrew’s Hospice is the only Inpatient Hospice Service in Lanarkshire with support for thirty inpatients, and provides additional services including home based palliative care support and outpatient clinics and services for the three main district general hospitals; Hairmyres, Wishaw General and Monklands.

Up to 120 patients are cared for by the Hospice each week, along with their family members and carers, under the care of three palliative care consultants, supported by a team of palliative care doctors, nurses, physiotherapists, occupational therapists and complementary therapists.

Work is expected to start in 2017 and the new design proposals will include:-